Nicole by O.P.I. Target Exclusives Part 2: Iris My Case, You’re S-Teal The One, and Mer-Maid for Each Other

Well ok, I originally promised it Thursday.  So it’s late from that date.

Then I promised Saturday.  As I have not yet gone to bed, I still consider it to be Saturday in my head.  So I’m totally still on time.

If you haven’t already, be sure to enter my latest giveaway!

At the beginning of the month, I posted about 3 colors from Nicole by OPI that I found at Target, which you can see here.  I know for a fact 2 are Fall Target exclusives, though I don’t think Look At Me Look At Me! is new.

This past week Target was having a sale on NOPI colors, and I had coupons for them… so I bought the remaining 3.  And here they are! 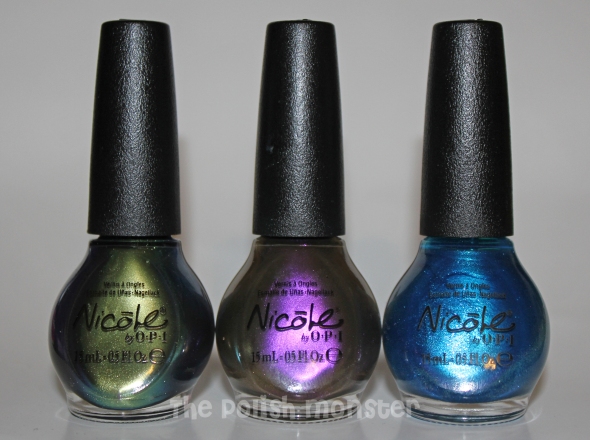 Mer-Maid For Each Other, Iris My Case, and You’re S-Teal The One!

First up I’m going to show off You’re S-Teal The One. 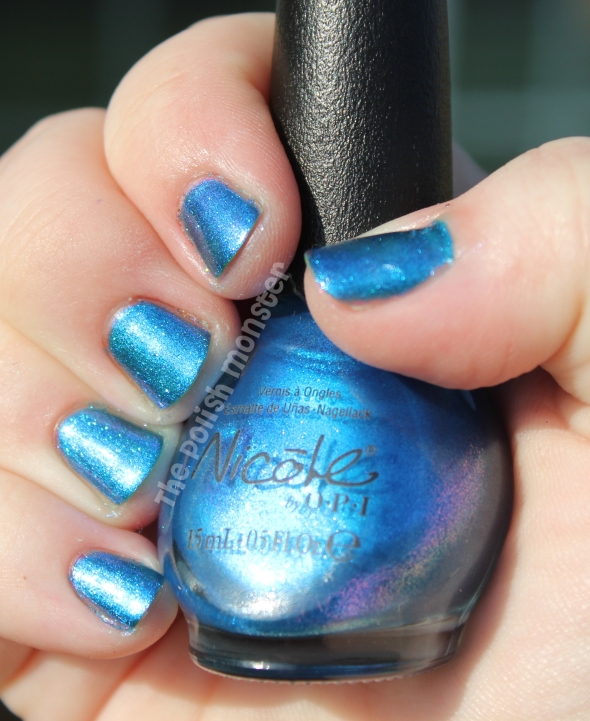 I know that the other 2 are definitely Target Fall Exclusives, but I’m not so sure about this one.  I think I heard somewhere that it isn’t- but I’m going to show it anyways 😉

You’re S-Teal The One is a pretty bright blue metallic-y shimmer color.  In the bottle it appears that there’s a strong (and beautiful) purple color shift, but that honestly doesn’t translate to the nail. I could barely see any purple once the polish was on- if I squinted very closely at a nail, I could see some purple shift in individual glitters.

This was REALLY bright!  I definitely noticed my nails a lot while wearing this.  This is 2 coats.  It went on fairly well- I don’t think I did much in the way of cleanup for any of these colors.

Next up- Iris My Case! 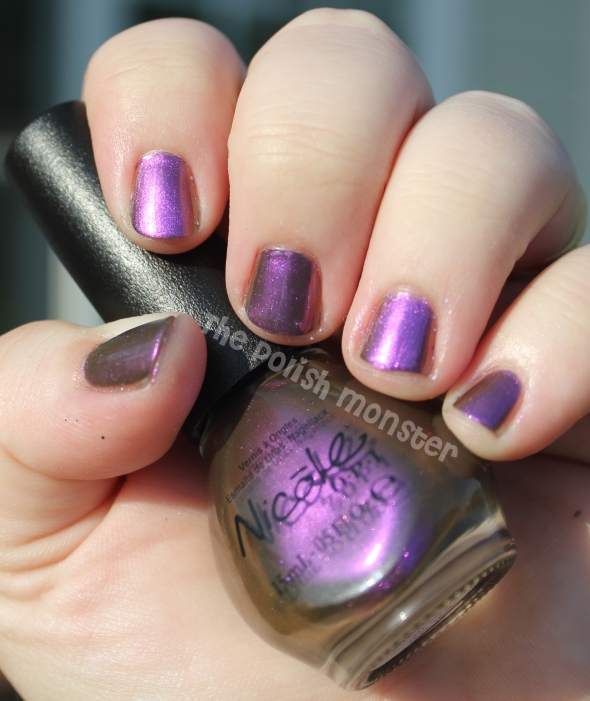 Iris My Case is a beautiful purple to greenish-gold duochrome.  Like You’re S-Teal The One, the effect was more prominent in the bottle.  However, you could still see the duochrome on the nail- if you look closely in the photos you can see where the effect happens.

A very pretty addition to any collection- I’m really looking forward to China Glaze’s upcoming Bohemian collection, which will be full of duochromes like this but probably more pronounced.  So this one will still be worth having!  2 coats again, not much in the way of cleanup.

And finally, we have Mer-Maid for Each Other!

When I first saw this display a month ago, I didn’t intend on picking this one up because I thought it was for sure a dupe of OPI’s Just Spotted the Lizard (which is a dupe of Chanel Peridot….).  However, I’m happy to say it’s NOT a dupe, and in fact I find it much prettier!

Mer-Maid for Each Other is a very pretty green duochrome.  Like Just Spotted the Lizard it leans golden in some lights, but unlike Lizard it also leans blue.  The base color is definitely a blue green rather than a golden color.

The name for this one is really fitting, because I instantly think of mermaids and the sea when I see this.  Like the others, this was 2 coats with minimal cleanup needed.

I decided to do a side-by-side comparison of OPI’s Just Spotted the Lizard and Nicole by OPI’s Mer-Maid for Each Other.  I completely forgot to include Sephora by OPI’s Mermaid To Order- but I can promise that REALLY doesn’t look anything like these 2. 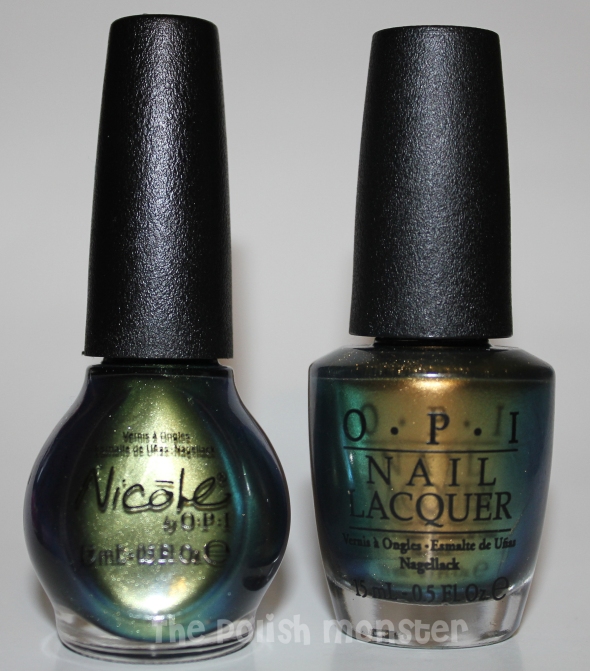 You can already see from the bottle shots when side by side that they’re nothing alike- but in the store without seeing both together it’s hard to tell.  In the bottle, Just Spotted the Lizard appears to have an AMAZING color shift from the color of Mer-Maid to Order all the way to golden, but that just doesn’t really translate to the nail (seems to be a common problem!).

Just Spotted the Lizard is on my pinky, middle finger, and thumb, while Mer-Maid for Each Other is on my index and ring finger.   I had trouble showing off the color shift of these, but you can see in this photo- the base colors are nothing alike.  Lizard is a greenish gold, while Mer-Maid is a golden green.  Hah, that makes it sound like there shouldn’t be a big difference 🙂

There you have it!  I’d say these are definitely worth picking up if you can find them- they’re at Target and retail for $7.04 (though this past week, they were on sale for $6.50 at Target).  You can also find most of these and the colors from the previous post at Target’s website, too!

See you all in a day for the next Mani Monday!

This entry was posted on July 22, 2012 by The Polish Monster. It was filed under Uncategorized and was tagged with duochrome, dupes, Nicole by OPI, OPI, Target.