Hello everyone!  I’ve been SUPER behind on posting- if you don’t already know why, be sure to check out tomorrow’s post (yes, I promise there will be one tomorrow too!  After that it’s anyone’s guess though!)

Some of you may remember that last year I collaborated with Melissa of Silly Bee’s Chickadees to create a special Christmas polish!  The final result was Diana’s Nippley Holiday, and it was inspired by my favorite Christmas movie, Christmas Vacation- specifically the pool dream sequence.  Money from each bottle was donated to my charity of choice, Toys for Tots! 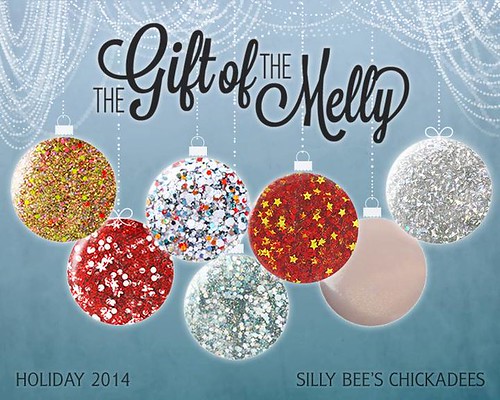 This year, Melissa is at it again with some amazing creations and even MORE collaborators!  And she was sweet enough to include my mini-monster, Sydney, who has swatched for her in the past.  Let me tell you- Sydney thought it was the most amazing thing to have ‘her own’ nail polish made for her!  She hasn’t stopped talking about it! 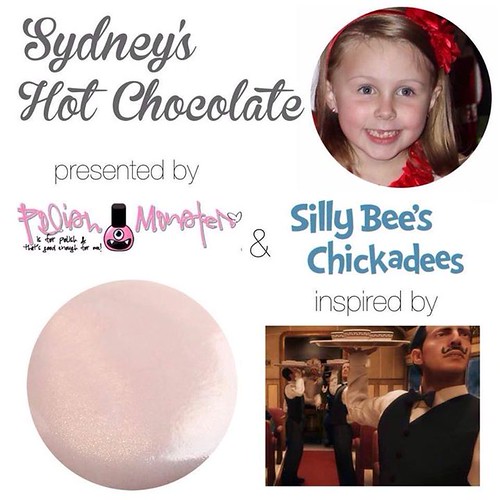 For her charity that $2 from every bottle will be donated to, Sydney chose Bikes or Bust- a local program through Toys for Tots that collects bicycles each year to give to local kids in need on Christmas.  She and her brother have picked out bikes the past few years to donate.  The drive for this year has already been finished (it runs around Thanksgiving for a week), but money raised will help for next year! 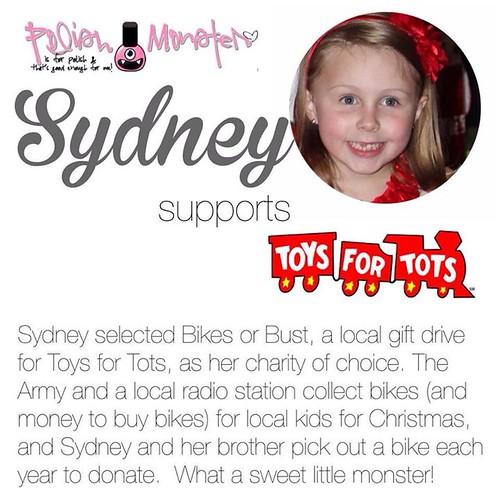 And here’s her picture!  It’s relatively hard to get an active 6 year old to pose for photos 😉 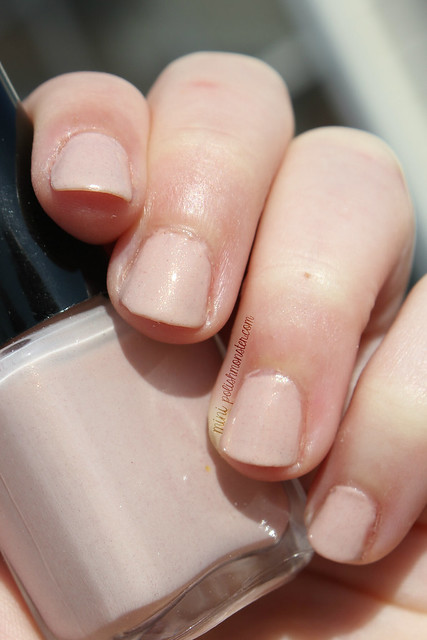 This is Sydney’s Hot Chocolate paired with my polish, Diana’s Merry Little Christmas, on an accent nail.  She loved the sparkle! 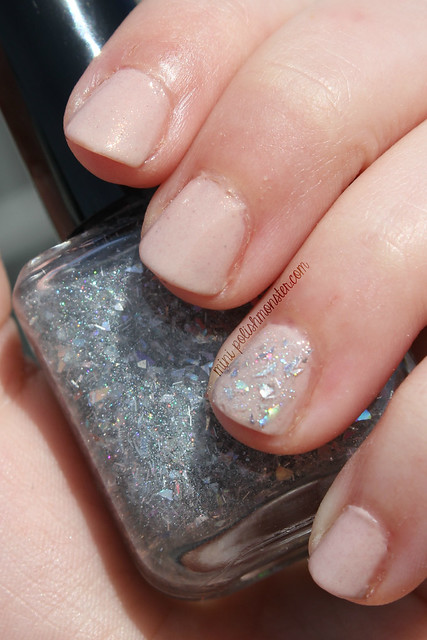 And here’s my picture of Sydney’s Hot Chocolate.  It’s a beautiful neutral- and the shimmer makes it so girly!  This would be a perfect shade to wear on it’s own for work! 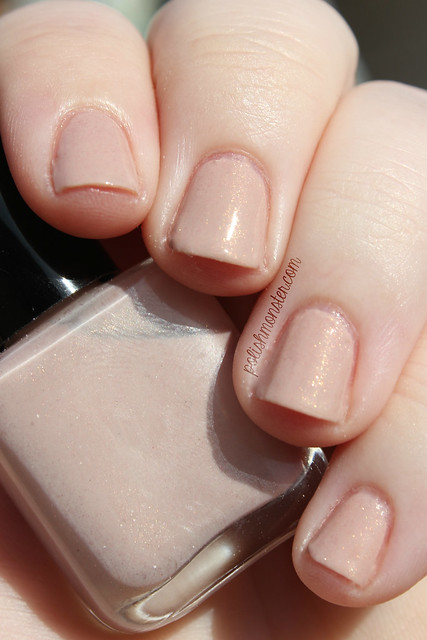 And now, time for my polish! 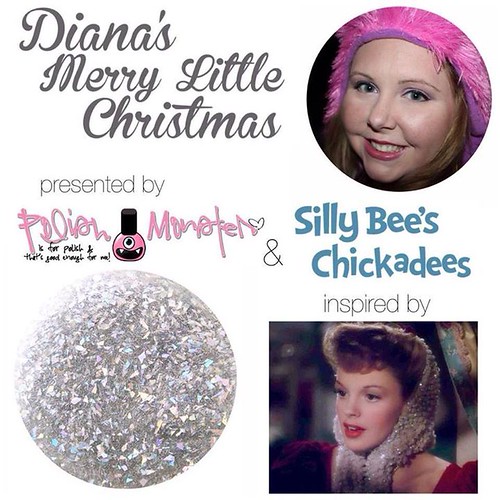 For this years Gift of Melly, I chose Meet Me In St. Louis.  It’s not completely a Christmas movie- but it did create one of the most popular Christmas songs, so I think it counts!

Meet Me In St. Louis isn’t really one of my favorite Christmas movies.  It is, however, my grandma’s favorite movie.  Truth me told, I would roll my eyes very obviously when she would insist we watch it on overnight sleep overs at her house.   It’s a bit cheesy, and as a kid/teenager I just did not appreciate the over the top musicals of the 40’s (I do now, though).  But it holds a very dear spot in my heart, because my grandmother has Alzheimer’s disease, and memories like watching this with her every year are what I hold on to now.  My grandma is still with us, but not mentally.  She no longer remembers who I am, or that I even exist.  She sometimes remembers my mom (her daughter), but not that she’s an adult.  She doesn’t understand that the old man living with her is her husband of 60+ years and is terrified of him.

I’ve also lost my other grandmother to dementia, and it is so incredibly hard and heartbreaking to not only the person suffering, but to their family and friends.  So in honor of both of them, I chose the Alzheimer’s Association as my charity of choice this year.  Hopefully one day Alzheimer’s and dementia will be things of the past. 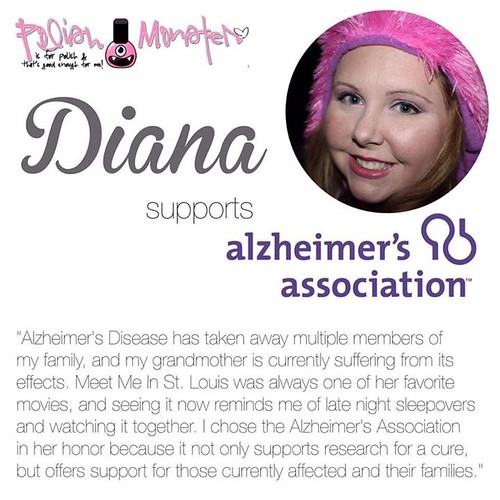 On to happier topics that don’t make me cry- like this beautiful polish!

I chose the scene where Esther (Judy Garland) sings Have Yourself A Merry Little Christmas to Tootie (Margaret O’Brien).  Melissa decided to base the polish on the beautiful wrap on Esther’s head- so full of sparkles and shimmer! 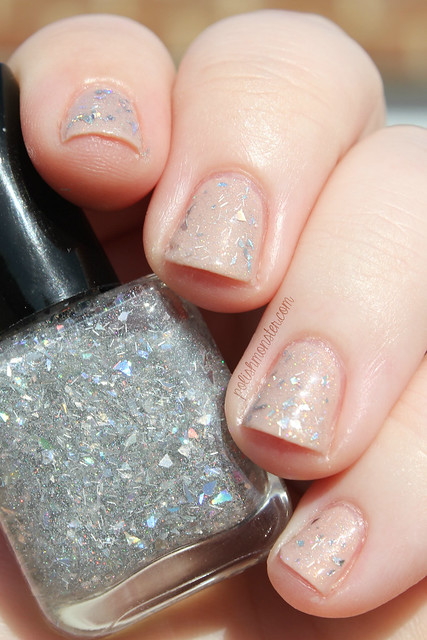 First I applied Diana’s Merry Little Christmas over Sydney’s Hot Chocolate- they pair so well together!

Diana’s Merry Little Christmas is a sparkly glitter topper filled with silver holographic shreds, bars, and fine glitter.  Out in the sunlight, this polish is BLINDING!  It is a holographic stunner.  I tried so hard to capture the rainbows shimmering off my fingertips, but failed!  Trust me though- this one is even more beautiful in person! 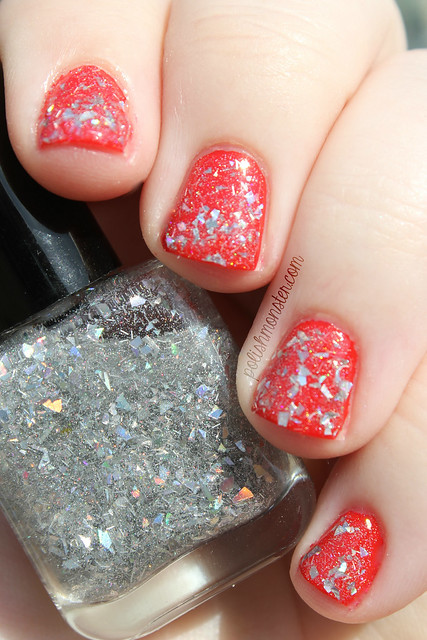 I then added 1 coat of Diana’s Merry Little Christmas on top of a Christmas red, similar to the dress Esther is wearing in the scene- I used Rescue Beauty Lounge’s Gondoliere for the photo (which is an amazinggg red).   I adored this combo!  Just SO Christmas-ey and fun!

Jacki’s Who-ville Christmas from Adventures In Acetone
Emily’s Dreaming of a White Christmas from The Lacquerologist
Ida’s Electric Snow from Ida Nails It
Steph’s Silver White Winters from Imperfectly Painted
Mishka’s Rare Exports from Accio Lacquer
You can buy any of these great polishes for $10 RIGHT NOW in Silly Bee’s Chickadees shop!  Silly Bee’s is donating $2 from every bottle sold to the blogger’s charity they chose!  Be sure to follow Silly Bee’s Chickadees on Facebook and Instagram for news and updates!
And now, if you’ve made it this far- a GIVEAWAY!  Just in time for the holidays!!
This giveaway is open internationally!  Though international addresses will probably not receive their package in time for Christmas 😉
Click the LINK BELOW to go to Rafflecopter and enter!  The giveaway ends on 12/17/2014 at 12am – GOOD LUCK!

This entry was posted on December 9, 2014 by The Polish Monster. It was filed under Uncategorized .