Hello again all!  Tonight I have the second part of my Darling Diva polish review- and it’s my very favorite!  I have Dangerous Driver and Ringer to show off!

These two are both GORGEOUS.  For those unfamiliar with Ringer- it’s a dupe of Max Factor Fantasy Fire, which is dupe (ish) of Clarins 230, better known as ‘Unicorn Pee’.  Dangerous Driver is a holographic version of Ringer- which just makes it more fabulous in my opinion!

Enough talking- on to the pictures! 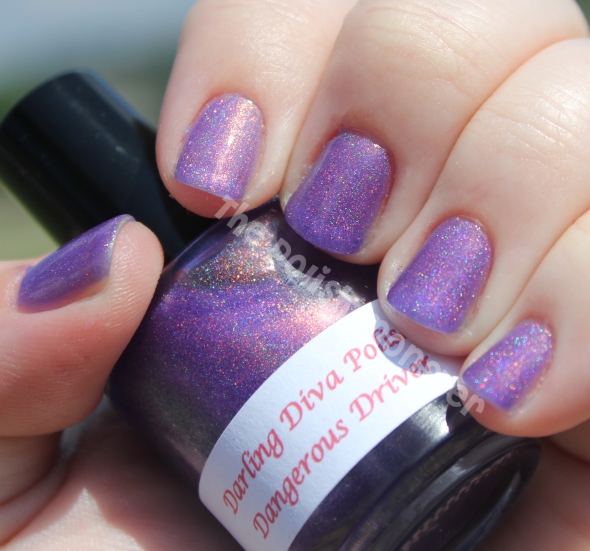 This is 3 coats of Dangerous Driver, outside on a sunny day.

The color shift of Ringer isn’t quite as visible in Dangerous Driver because of the spectacular holographic effect.  But this polish is jaw-droppingly gorgeous.  I think these photos look pretty good, but they still do no justice to this polish.

A comparison shot- I took both inside my bedroom; one was in front of the opened window, and the other was under a lamp.

Next up: Darling Diva Polish Ringer!

Ringer is a beautiful polish.  It is almost a dead-on duplicate to Max Factor’s Fantasy Fire, but just a tad more sheer and lighter if you’re not layering it.  This photo was taken with 4 coats, and you can still see a bit of VNL.  But none of these colors are really at their best without a polish underneath!

Sadly, I had already traded away my Fantasy Fire before I took these photos.  I did a swatch comparison, so I can say that they are almost identical (but now can’t find that swatch wheel!).   However, the reason I traded off Fantasy Fire… was because I finally got my hands on a bottle of Clarins 230 itself!

Ready for some comparison photos??  Here we go! 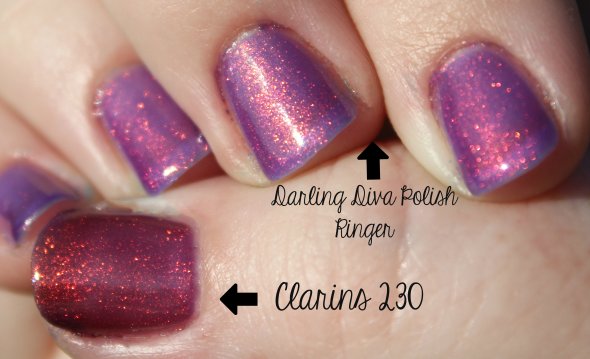 The first comparison shot is both colors with no underwear.  This is the biggest area that Clarins will differ from it’s competitors.  Clarins 230 is a completely different base color, and it honestly just seems a bit more ‘deep’ than the others.  But that is really something that almost no one will notice.  Swatched over black, however… 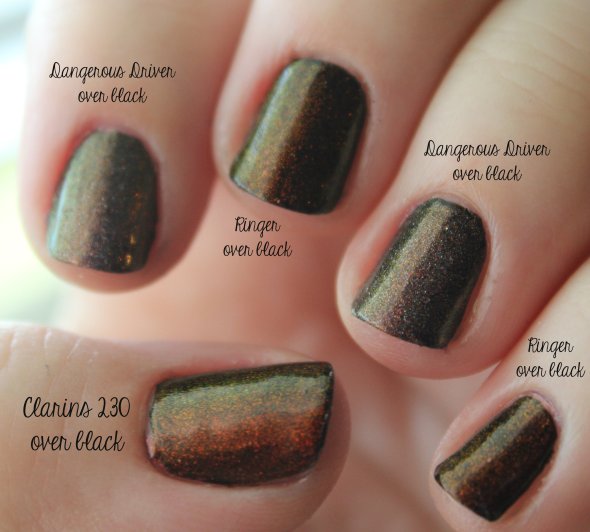 Over black there’s almost no serious visible difference between Clarins 230, Ringer, or Fantasy Fire.  Clarins is a bit more ‘vibrant’, but its a subtle difference.  Over black, Dangerous Driver’s beautiful color shift is clearly on display along with the beautiful holo effect. 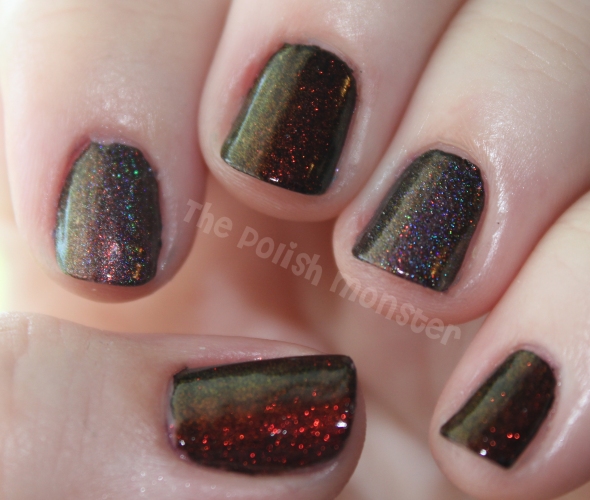 *Sigh*  So many sparkles in one photo!  These 2 above photos were taken indoors next to an open window to still get the sparkle, but allow the color shift to shine through more (the full sun makes Dangerous Driver sparkle like crazy- as you can see below!) 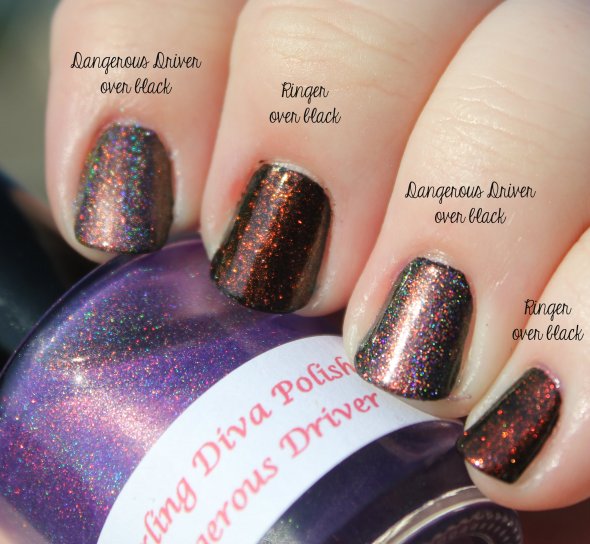 And to round off the comparisons, I took photos of Dangerous Driver and Ringer outside in the full sunlight. 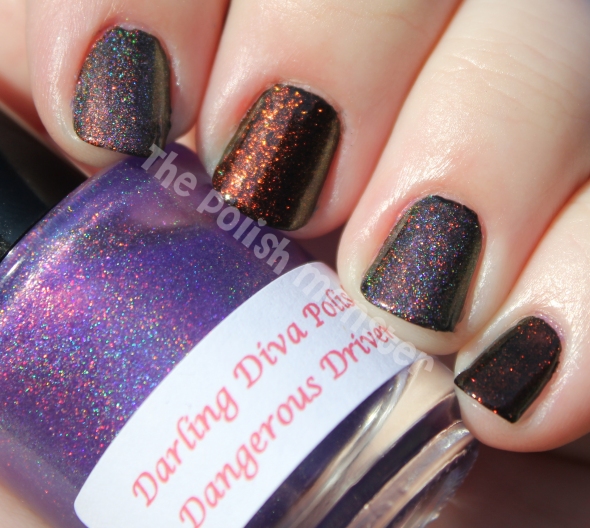 You can find Darling Diva Polish on Facebook, and you can buy her beautiful colors at her Etsy shop.   All of her colors are $8.00 with the exception of holo colors, like Dangerous Driver, which are $12.00.  And she ships internationally for a reasonable rate!

Be sure to check her out!  I really feel like Dangerous Driver is a must have- and Ringer is for sure if you haven’t found Fantasy Fire (though you’ll want it if you’re like me and just love having similar colors!).

Hello All!  I have a TON of Darling Diva Polishes to show off, so I’ve decided to split them into 2 posts.  Today I will feature Cotton Candy, Sophia, and Princess Luna!  Friday I’ll be showing off Ringer and Dangerous Driver.

Earlier this week, I had a big swatch-a-thon with all of these beautiful colors.  Everything looked nice in person, however, I’m not entirely happy with the photos for this particular post (I think Friday’s pictures look great though).  I already promised this write up for today, and I won’t be home tomorrow, so I wanted to go forward with posting.  But I think I’m going to retake some photos this weekend and add them in.

First up, we have Cotton Candy!

Cotton Candy is a pretty shade of pink, with various sizes and shapes of white glitter- but not a ton of glitter, so it gives the polish a dainty feel.   These photos were taken with 2 coats of polish.

I only used Cotton Candy for the photos, but I think next time I’ll try layering over a very similar pink (maybe Zoya Lara?)- since the second layer does cover up the first layer’s glitter almost completely.   Either way, you’ll have a beautiful look! 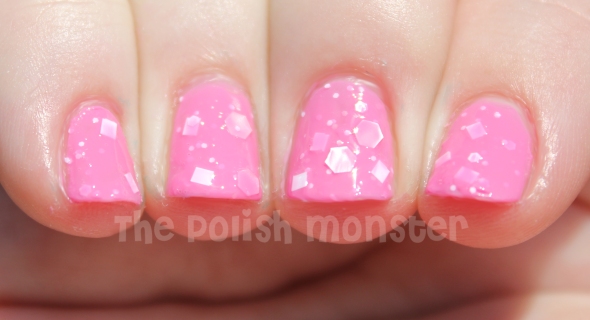 Next up, we have Sophia! 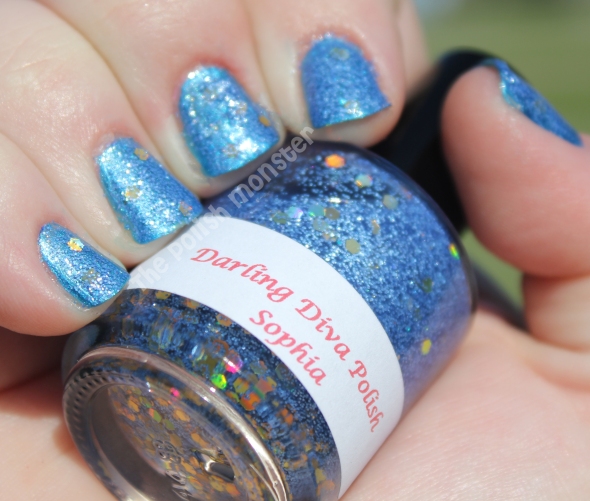 For Sophia, I opted to use an underwear coat of Love My Nails Electric Blue, with 2 coats of Sophia.

Sophia is a beautiful periwinkle blue fine glitter, sprinkled with the occasional gold holographic hex glitter.  I had to work to get the ones I did on my nail!  I’d say average use would be closer to 1-2 on each nail without any fishing.  This color would look beautiful over black or white, and I bet it would look pretty over a red for a patriotic look.

And last but certainly not least, we have Princess Luna! 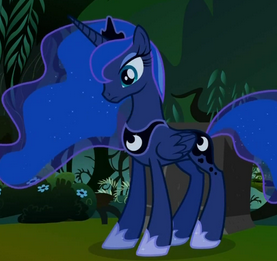 Princess Luna is inspired by the lovely Nightmare Moon/Princess Luna of My Little Pony: Friendship is Magic.  I’ve said it before, but I actually recommend MLP even for grownups.  Seasons 1 and 2 are available for streaming on Netflix, and they’re awesome.   Princess Luna is the sister to Princess Celestia, who is inspiration for another polish by Darling Diva Polish! 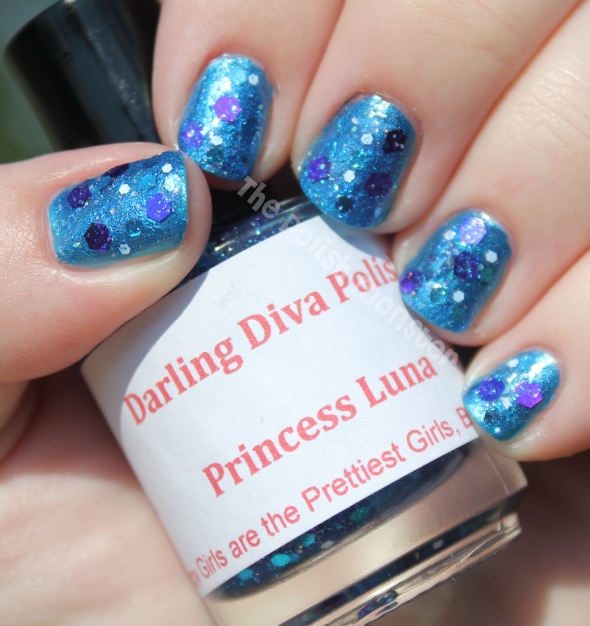 Much like her inspiration, the polish version of Princess Luna is a beautiful blue, full of sparkles, accented by deep purple and teal glitter, with a bit of white thrown in.

Like Sophia, I layered 2 coats over Love My Nails Electric Blue. 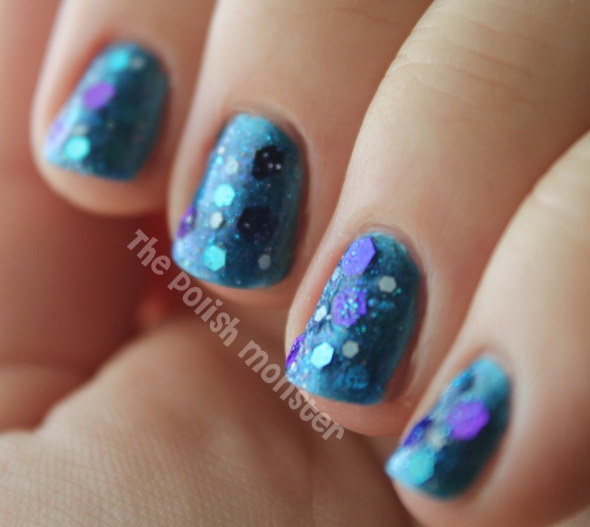 I placed some of the larger glitters, but I didn’t have to fish for any of these, they came right out to play!  I think this is my favorite of tonight’s colors 🙂  But I may be partial due to the reference!

You can find Darling Diva Polish on Facebook, and you can buy her beautiful colors at her Etsy shop.   All of her colors are $8.00 with the exception of holo colors, like Dangerous Driver, which are $12.00.  And she ships internationally for a reasonable rate!

Be sure to check her out, and also check back on Friday for Part 2!  Ringer and Dangerous Driver are SO GORGEOUS- I’m definitely saving the best for last.  You won’t want to miss it!