This is just a quick post- I was going to just post this on Facebook (if you’re not following there, you should!  I’m going to base giveaways on FB followers!) but decided to just do it here.

I hadn’t been to ULTA in about a month- which is LONG for me- so I stopped in today while the oldest was at preschool.   Right in the front, there was a large display of ‘Summer Exclusive 2012’ colors by O.P.I. 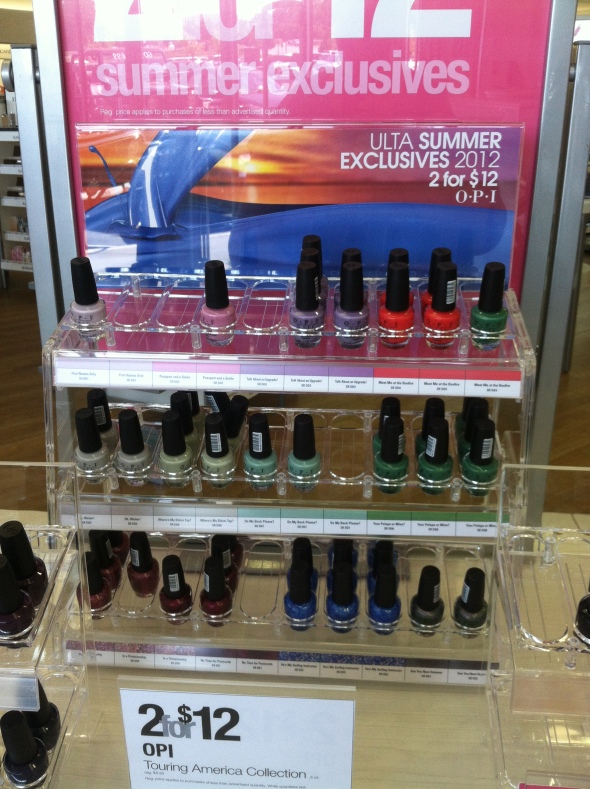 Now, at first I was confused.  When I was in here only 1 month ago, they had the ‘Summer Exclusive’ colors- and it was just 4, and none of these.   Karen of Frazzle and Aniploish did a great writeup of them here, along with the identical Nicole by O.P.I. twins.  I already owned the NOPI You + Me = Blue, so I picked up Hot Fun in the Summer-Lime (it stained my nails badly- they’re still stained).

Now here we have 12(!) colors and no sign of those original 4 in my store.  I’m assuming it’s like this at every ULTA, but they don’t display O.P.I. online so I can’t confirm that.

So the REAL reason this display interested me- was the polish that’s nestled right there on the bottom row, left side.  Can’t see it well?  I got a closeup! 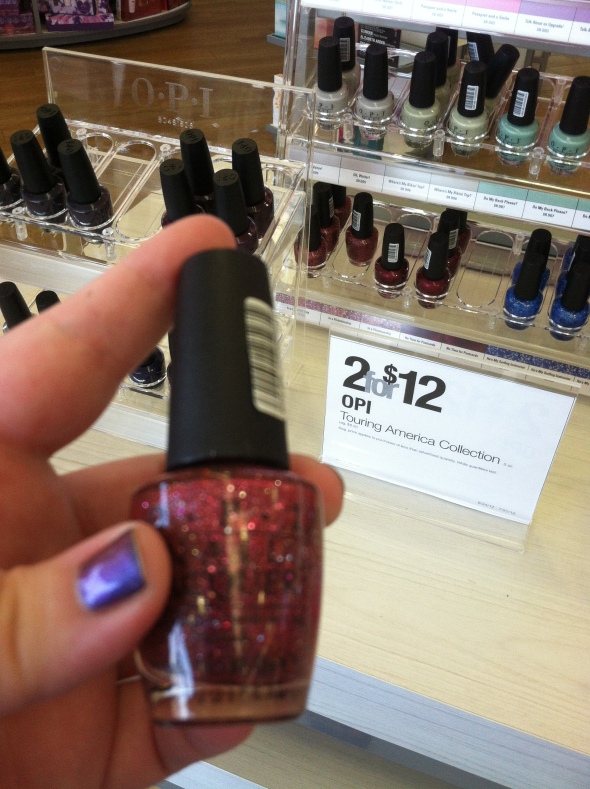 Yeah, I didn’t realize my phone did a cruddy job with this photo or I would have taken more- maybe.  The manager was looking at me a bit strangely as I snapped pictures of their displays.

It’s O.P.I.’s Excuse Moi!, repackaged as ‘In A Flirtationship’!  Since I just featured this last week and had a few people lamenting that it was no longer available- it’s available again, at least for a little bit!  This is the 2nd repackaging of this polish (It also appeared for ULTA’s Holiday collection this year), so it may not make a 4th appearance.  Grab it while you can if you want it!

As expected, every single one of the colors is a repackaging of past O.P.I. collection colors.

If you’re interested, here’s what each polish is (as far as I can tell).  New name: Old Name (Collection).  These go from L to R, top to bottom on the display.

In A Flirtationship = Excuse Moi (Muppets)
No Time For Postcards : The One That Got Away (Katy Perry)
He’s My Surfer Instructor : Last Friday Night (Katy Perry)
See You Next Summer : Not Like The Movies (Katy Perry)

They’re listed as 2 for $12, though the manager at my ULTA was telling me that the original ‘Buy 2 OPIs get 1 Exclusive Free’ still applied.  I saw no sign to verify that though.  Regardless, $6 for an O.P.I. is a good price!  If you want to head in and pick a few up, take this 20% off coupon with you!  There’s a lot of pretty re-released colors there, and they’re a bit cheaper than normal- good chance to grab any you may have missed!

Try It On Tuesday: O.P.I.’s Excuse Moi (The Muppets Collection)

I saw on Peace Love Lacquer‘s facebook page that they, along with a group of bloggers, would be starting ‘Try It On Tuesday’ in order to start using untried polish.  Tuesday is one of my unscheduled days, and it seemed like something fun to participate in!  I’ve purchased a large amount of colors in a short time, so I definitely have a lot!

This lovely glitter was a part of O.P.I.’s The Muppets Collection, which was released in conjunction with the movie (of the same name) around November/December 2011. 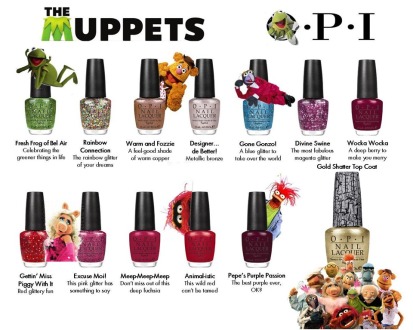 I’m actually very embarrassed this is one of my untried polishes, because it’s also one of my favorites.  I didn’t purchase any of these when they came out because I completely forgot!  My nail polish obsession didn’t really take off until January, so even though I had heard about these it just didn’t occur to me that they wouldn’t always be around.

I have always LOVED The Muppets.  I watched The Muppet Show with my parents when I was little, watched The Muppet Movie and The Muppets Take Manhattan until the tapes broke, and watched Muppet Babies every morning in elementary school.   My mom has always sung ‘The Rainbow Connection’ to me as our special song.  And my very favorite muppet?

So aside from it just being gorgeous, I wanted Excuse Moi! because of the character it represented 🙂  I also own Meep-Meep-Meep and Warm & Fozzie from the collection.   The second two I was able to find in a salon, but Excuse Moi! eluded me for a long time.  I finally found my bottle a few months ago when I stopped into a random nail salon and they let me buy their used bottle for 1/2 price.  I was slightly annoyed when I got home and actually examined the bottle (I was too excited in the salon) and realized that it was basically dried up.  Luckily for me, I bought some Beauty Secrets Nail Polish Thinner and it worked wonders!  I added enough thinner to that polish to make it 3/4 full, and it’s back to normal consistency (that’s how dried it was!).   But that explains why my bottle shots have a ring of the larger rainbow glitter around the center.

Recently (and as recently as this morning), I’ve seen bottles of Excuse Moi! in Target’s O.P.I. section.  This has happened at 2 of the 3 Targets around me.  The one closest to me only opened 2 months ago and did NOT have this on the shelves last week.  Today there were 3 bottles.  I’m not sure if they’re shipping excess stock to various stores, but it can still be found!

This polish applied like a dream.  O.P.I. does a lot of things well, but when they do glitters you can bet they’ll be amazing.  All of the following swatches are only 2 coats, and I had ok coverage at just 1 coat.  It is filled with a beautiful small pink glitter, and accented with slightly larger (but still small) rainbow glitters.  My nails are SHIMMERING!

Did I mention that I had basically no clean up?  Even with my small nails, their larger brush glided over nicely and the polish stayed where it was meant to be.  The only nail I had trouble with was my pinky, and that’s because it’s slightly smaller than the brush size!

If you don’t already have this polish and spot it somewhere, I HIGHLY recommend adding it to your collection!  You won’t regret it!  (Unless you hate pink or glitter, of course…)

Thanks for reading!  Until next time,