HARE Polish: Love You To Pieces!

In continuing with my ‘pictures I wanted to post before Valentine’s Day’ promise, today I have a beauty from HARE Polish, Love You To Pieces!

The minute pictures were posted of this polish, I knew I had to have it.   It’s a beautiful plum purple jelly polish filled to the brim with different colored flakies!  What’s not to love?

Application was great- everything went on smooth and easily.  Photos show 2 coats plus topcoat.  And since these are flakies and not glitter, removal was a breeze!

You can find this beauty and more amazing colors are Hare Polish on Etsy and also at Llarowe!  It took a lot of willpower to walk away with only this shade during her most recent restock- there were other new beautiful colors released!  For updates on new colors and restock dates, you can follow Hare Polish on Facebook and also at harepolish.com.

I hope everyone’s having a great 4th of July weekend!  We’ve had MASSIVE amounts of rain since Thursday- last I heard as of yesterday we were at 8 inches, though it’s rained a little since then and doesn’t look to be done until next week.  So it’s been a soggy 4th of July weekend for us, spent inside because of local road flooding.  But it’s also been relaxing!

I figured today would be a good day to post a bunch of swatches I’ve done here and there over the past few months.  Some of these were taken back in May- you can probably guess based on the length and shape of my nails.  I tend to take photos when I wear polishes, and so some of these were just normal manis, some were intended for posts that I never did, and some I just wasn’t happy enough with to post.  I’ll try to give links to most stores at the end of the post.

First up!  My patriotic offering for the weekend 😉  This is Different Dimension’s Right to Vote- which was my Memorial Day mani. 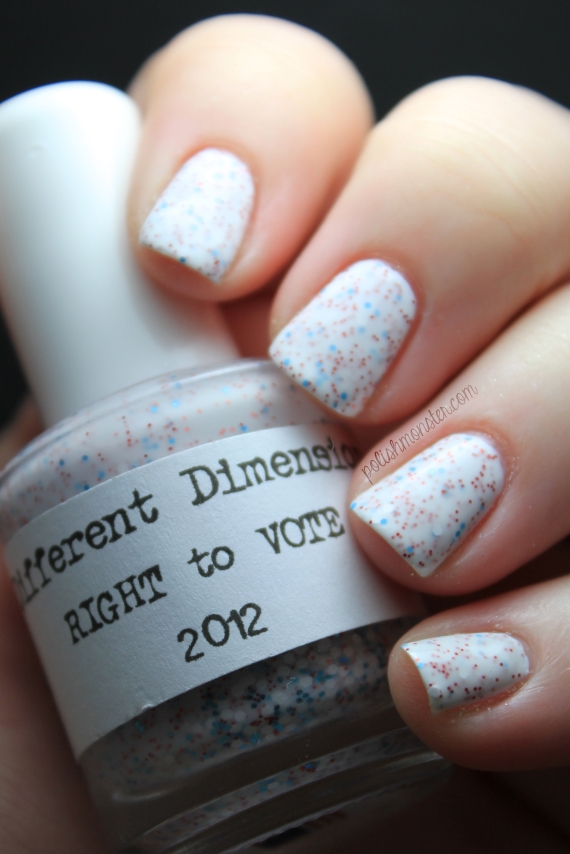 Missi offered this pretty polish back in the fall to celebrate the US elections.  A milky white crelly polish filled with red, white, and blue glitters.  This is 2 coats of Right to Vote, no topcoat.

Last week, I did some quick photos of Hare Bisbee and Bisbee 2.0 to show people the differences between the two.   Nikole sent me Bisbee 2.0 as a surprise in a package I received that week, so I couldn’t wait to show everyone how it compared.   The first photo is Bisbee 2.0 (note the new Hare bottle), and the second photo is the original Bisbee.

I’m glad the new formula is called ‘Bisbee 2.0’, because there are definitely quite a few differences- though you still have the same overall ‘feel’.  The color is different- Bisbee 2.0 is a more blue-leaning teal than the original.  Both are packed with gold glitters, but Bisbee 2.0 has squares, and lacks the large hexes the original was known for.  Bisbee 2.0 also has a lot of shimmer that the original does not have- it was a bit stubborn showing up in my pictures, but it’s quite obvious in person.

Next up is Sephora by OPI’s Metro Too Chic.  This is a pretty taupe polish with a ton of shimmer.  I did find the polish to be a bit on the thick side and had a bit of trouble with application.

This is one of the polishes I picked up at Sephora recently- if you haven’t already heard, Sephora is discontinuing the OPI line and expanding their own line of polishes.  Because of this, all Sephora by OPI polishes are discounted quite a bit.  Definitely time to grab any you may want!

This beautiful blue is Pivot! by Weird Indeed.  Weird Indeed was an awesome indie line last spring/summer, and she closed her doors when she went back to school (or I’m pretty sure that was why- it’s been awhile!)  I feel thankful I was able to grab a handful of her awesome polishes while she was open!

This color was part of the Friends inspired polishes- if you’re unfamiliar with the show, this is the inspiration:

I used Pivot! as the undie polish for Above The Curve’s You’re Turning Ne-On– they look great together!

This next blue is Wet N’ Wild’s Cabo Cruise, which is a new polish in the Fergie line.  I found mine on the Summer display, but I have since seen it on other Fergie polish displays (which makes me think it could be permanent and not an LE shade).  I had a hard time getting it to show in pictures, but it has a beautiful blue-green shimmer.    I used this underneath Lynnderella’s The Bride Turned Blue (which I posted to IG and my Facebook page feed).

Different Dimension Ditz- which is part of her 80’s Baby Collection.  This is a beautiful neon pink jelly with a scattered holo effect.  SUPER beautiful on a sunny day!  I’ll be showing the whole collection soon.

Enchanted Polish May 2013.  This was really pretty, though sadly I wore it on a slightly cloudy day so I wasn’t able to enjoy it at it’s fullest 🙂

My mediocre nail art attempt for Jen’s Nail Files 2000 likes contest!  The theme was to interpret any Darling Diva Polish into art- I chose Uncharted Space, which was part of her Battlestar Galactica line.  I did a base of Chanel Taboo with a bit of my own polish, The ‘Verse, on top.  I can’t remember the specific polishes I used for the art.  For those unfamiliar with the show- my index finger is a Cylon Raider (‘bad guy’ space ship), and my ring finger is a Colonial Viper (‘good guy’ space ship).  I originally attempted to paint the Galactica on my middle finger but it just wasn’t working out, so it got painted over.  No BSG art is complete without ‘So Say We All’ 🙂  (ignore my wonky cuticle areas-  I had the last bit of a spray tan hanging on and it had dried me out as well)

I have so.much.respect. for girls that are able to do amazing nail art- especially when you’re limited to only nail polish.  It’s HARD!

Pretty & Polished’s Popples, which is part of their Summer in the City collection.  I was lucky enough to win this collection from a mani contest on their Facebook page!  All the colors are beautiful and I was holding off for a sunny day to swatch them all.  I’ve worn these 2 so far! 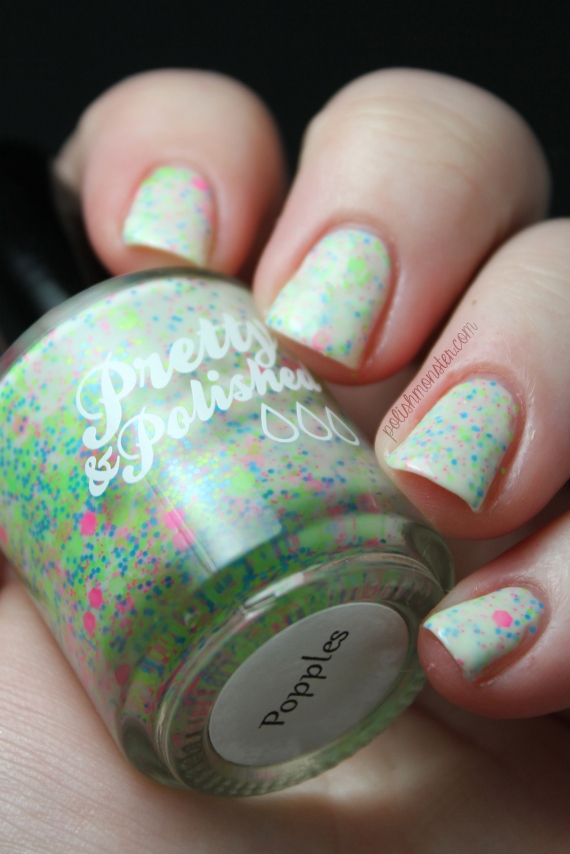 Also from the Summer in the City collection, I Want Candy is a beautiful bright pink holographic polish. 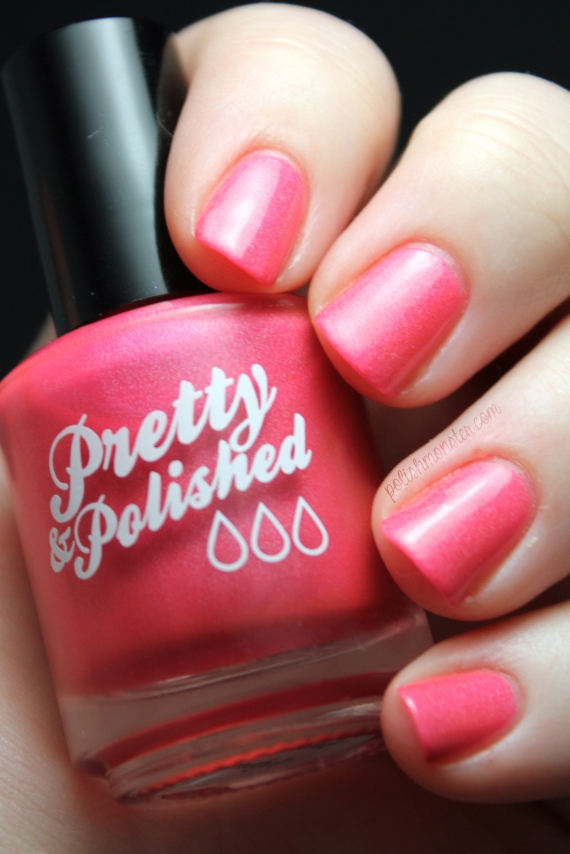 I had a hard time getting the holo to show up inside, but it shines outside 🙂

Roundup of where to find most of the polishes: