Good evening everyone!  Today was the last day of Blizzcon, the annual convention for all fans of Warcraft, Starcraft, and Diablo!  I’ve mentioned before that I’m a very long-term World of Warcraft player- I’ve been playing since just slightly after launch (so *gulp* over 8 years now)- and still actively play.  So of course, this weekend was full of excitement as I watched the events on my computer via a virtual ticket (traveling to Anaheim is just not in the cards right now!)- and I decided there wasn’t a better way to celebrate than to do a subtle World of Warcraft post!

While not created specifically for World of Warcraft- if you’re familiar with Femme Fatale Cosmetics and play World of Warcraft, some of the names and themes may seem very familiar.  The owners play, and often let the beautiful places and things within the game inspire the creations!

First up tonight we have Aqueous- a beautiful blue crelly polish filled with teal, navy, blue, magenta and pink glitters.

LOVE this polish!  I’m a sucker for crelly and jelly polishes- seeing the glitters suspended through different levels makes me smile 🙂

Application was wonderful.  I got plenty of extra large pink glitters with absolutely no fishing- I even had to put a few back!  I didn’t have to worry about dabbing, I applied like I would a normal cream polish and got wonderful glitter placement.  My photos show 2 coats with topcoat.

Next is a long favorite of mine- Spring Fling!

Spring Fling has been a favorite Femme Fatale color of mine for awhile now- I love mint greens!  And adding pink?  Must be meant for me 🙂  There’s also plenty of white glitters, diamonds, and micro neon green glitter!

Application was wonderful again- the only issue I had (if this is even an issue?) is that I had so much luck with the larger glitters, I had to start putting diamonds back into the bottle.  My photos show 2 coats with topcoat.

Next is Witchful Thinking, a beautiful glitter topper filled with grey, silver, black, glitters and shimmer!

Witchful Thinking sparkled like MAD outside in the sun!  Application was great- these photos show only 1 coat!  I did have to do a bit of dabbing to fill in a few holes, but for the most part it went on as shown- which is crazy to me, since it looks like I placed each large glitter purposefully!  It sort of reminds me a bit of fish scales (in a good way) 🙂

Last but not least is Lime Thief, a beautiful lime green jelly polish filled with green and orange glitters!

This polish was my surprise favorite of the bunch.  Honestly, this is one I probably wouldn’t have given a second look to- I didn’t even love it looking at the bottle in person.  And then I put it on- and WOW!  Lime Thief is incredibly juicy looking, and so bright and happy!  I wore Lime Thief for a few days before I was forced to take it off 🙂

Pictures show 2 1/2 coats with topcoat (I added a thin 3rd layer just around my nail line, but not a full coat).  Application was amazing- no fishing, no dabbing, no cleanup- just normal application.  Perfection!

Femme Fatale Cosmetics not only sells their own beautiful nail polishes, they also offer an amazing line of mineral based cosmetics (I own about 15 of their beautiful eye shadows, they’re wonderful!), and they’re also now a nail polish stockist for Australia!  They offer local and imported nail polish to Australian customers, including Emily de Molly, Enchanted Polish, HARE, and Girly Bits among many others!

Femme Fatale nail polish is available via http://femmefatalecosmetics.com.au/ for $10 AUD, and they’re now able to ship overseas!  For nail polish lovers outside of Australia though, sometimes shipping can be a bit prohibitive- so Femme Fatale polish is also available through the following international stockists:

So what do you think?  Any favorites from Femme Fatale?  I’m also really loving their beautiful holos that they’ve recently released!

*Products in this review were provided for review.  Thoughts and opinions are my own*

I’ll warn you- this is a VERY picture heavy post!

Some of you already know, but I play World of Warcraft.  I have since shortly after it was released-  just over 7 years.  So when Missi of Different Dimension put out a call for bloggers that also play WoW to show off her new collection- I jumped at the chance!

World of Warcraft has it’s 4th expansion pack, Mists of Pandaria, coming out in just over a week.  The theme of this expansion is Pandaria- ie, panda people (for those who aren’t familiar with the game).  Much of the backbone of WoW centers around conflict between two warring factions- The Alliance and The Horde (which when playing, you play for the faction of your choice).

Of course, you certainly don’t have to play- or even like- World of Warcraft to love these polishes!

Be sure to grab any you want NOW- Once the Expansion is released on September 25, these will be gone for good!

I’m going to start off tonight with Murloc!

So that green guy is a murloc!  Murlocs are (usually) hostile creatures found… well… all OVER the place in WoW.  They’re sort of like fish people.  There’s a lot of color variations with them, but this particular one shows off the polish colors the best! 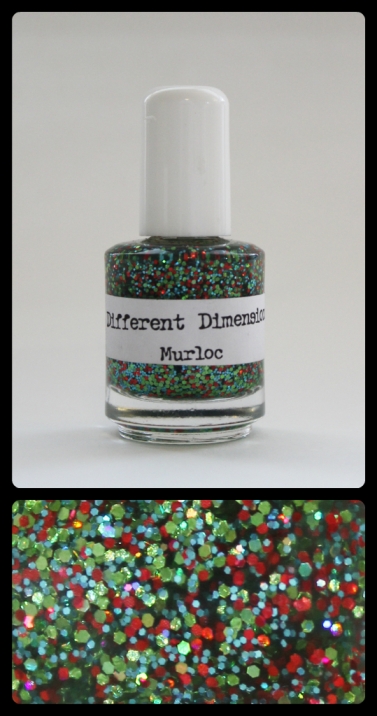 Murloc is a pretty glitter polish filled with green, blue and red sparkling hexes.  This could be opaque in multiple coats, but I chose to use it as a layering polish. 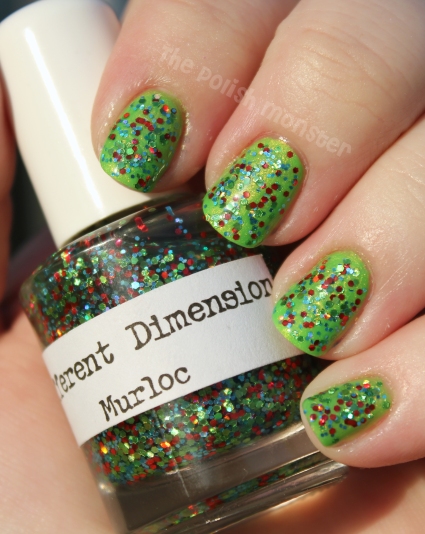 This is 2 coats of Murloc over Spoiled’s I’m So Jaded.   The glitters were so beautiful and sparkly- there is a bit of a holo shine to the them, especially the blue and green!

Next, we have Spectral Tiger!

The Spectral Tiger is a very rare, very coveted mount in the game.  It’s only available via the WoW Trading Card Game, so it costs a lot of real-life money to acquire (think many hundreds of dollars).  It’s a ghostly, slightly transparent tiger.   I do not have this mount 😦

But I DO have this beautiful polish of the same name! (yeah, cheesy, I know) 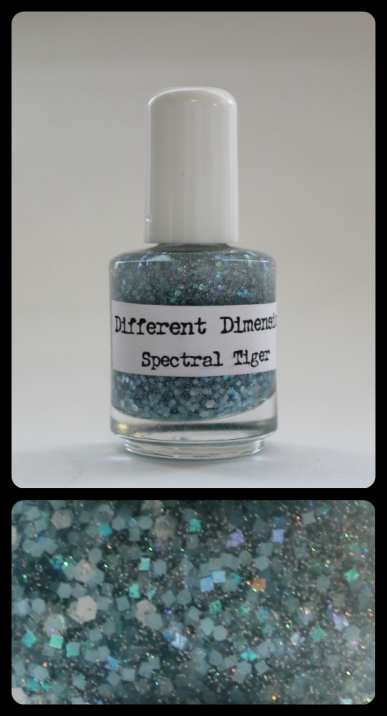 But the BEST part about Spectral Tiger?  It GLOWS!  I took this picture in my hall bathroom with the door shut.

Next up, we have Bad Ass Panda! 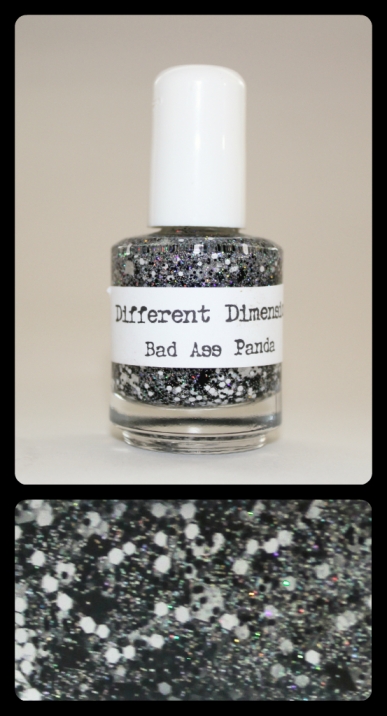 Bad Ass Panda is a pretty black and white topcoat.  It’s filled with black and white hexes of various sizes, black diamonds, and holographic glitter- so there’s a lot of sparkle!

As a reference- here is a Pandaren, the new race that’s being introduced in Mists.  To be specific- this is MY Pandaren.  This is my main character (Sunni) as she looks on the beta servers- since you can change your character’s race over there.  I plan on doing this the day the expansion comes out, so this is exactly how she’ll look again in a few weeks 🙂  She’s also hanging out with my very favorite companion pet, Bananas- he was a birthday present from my husband about 4 years ago.

For those interested- I’m an enhancement shaman, and I play Horde side!

This is 2 coats of Bad Ass Panda over 2 coats of Zoya Lola.  I did do a tiny bit of glitter placing for these photos, just to ensure that every nail had a diamond, but it’s not necessary for normal wear!

And now, we just have the last 2 polishes- Alliance and Horde.  I happen to have faction-specific stuffed animals (yes, I do, and I won’t allow my kids to play with them), and they’ll be making appearances alongside their faction’s colors!  You already know I play Horde side, so I’m leaving the best for last. 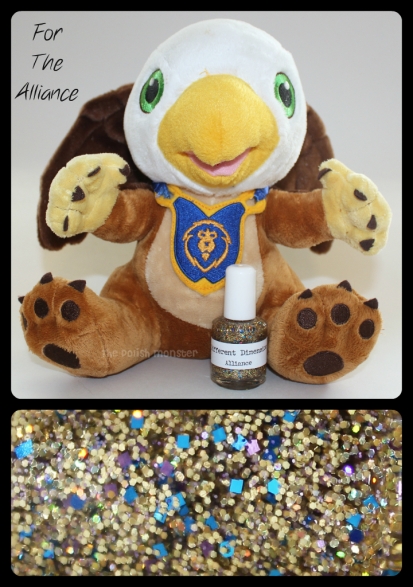 (One of the Alliance’s war cries is ‘For The Alliance’, and their main aerial mount is a gryphon- this is a stuffed baby gryphon)

Alliance is filled with blue, lilac, and holographic gold glitter.  Like the ones before it, this is best used over another polish!

I chose to layer 2 coats of Alliance over Love My Nails Electric Blue.   It’s not quite the right shade of blue, but that’s ok.

Here’s my nails posing with the Alliance crest, which is the inspiration for the polish! 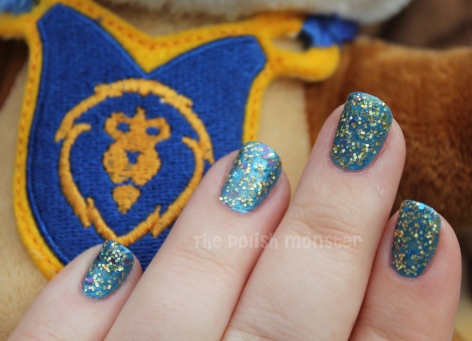 And last (but certainly not least), we have Horde!

(One of the Horde’s war cries is ‘Lok’tar Ogar’, which means Victory or Death in orcish.  Their main mode of aerial transportation is a wryvern- and the stuffed animal is a baby wryvern).

This polish is the best in the collection for using with no polish underneath.  It’s a jelly finish, but it’s almost opaque in 2 coats and completely covers in 3.  Horde is filled with silver and red hex glitter and fine silver holographic glitter in a black jelly base.

This is 3 coats of Horde with no basecoat.  If the second coat was thick, a 3rd coat wouldn’t be needed!  These photos truly don’t show off the holo sparkle of this polish well- it REALLY shines! 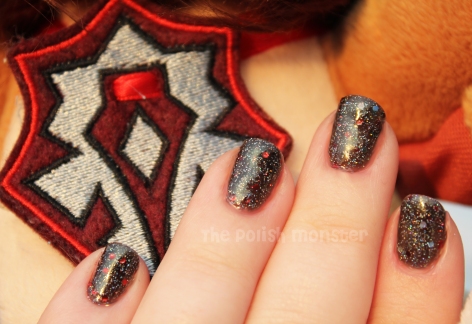 Posing with the Horde crest- like with Alliance, this is the inspiration for this polish!

Overall, I was blown away by this entire collection.  I thought they looked pretty and awesome before I recieved them, but once I put them on, they were all just so very gorgeous.  I’m partial to them all of course, but if you have to be good and just grab 1 or 2- I’d say Spectral Tiger is a must-have, and if you lack a nice black and white topcoat Bad Ass Panda is as well.

You can follow Different Dimension on Facebook, and be sure to check out her Etsy Store!  In addition to the new WoW collection, there are a TON of gorgeous polishes.   Each color in this collection sells for $10 and Spectral Tiger sells for $12.50, or you can get the whole set of 5 for $45 (a discount of $7.50!).   Other polishes are $8.50, and Glow in the Darks are $10.  She also now offers mini sets!

*These polishes were sent to me for review.  All opinions are my own.*